Twenty-something years into writing television and film scripts, I thought I’d have a crack at writing ‘the novel’.  Why not? I thought. Everyone’s got a book in them, right?

I’d worked for the likes of Alas Smith & Jones and Mr. Bean, among others, during which time I managed to get the film company, Working Title, to commission a film from me, It was to be called ‘The Blue Tailed Falcon’, a mystery thriller with funny bits, and I was extremely disappointed when, like so many, the film didn’t make it to the screen.

One of the producers suggested that it might work better as a book, but I’d stopped listening by then as I’ve always found it difficult to listen and sulk at the same time.

It was several years before I finally took the suggestion and wrote seven chapters of a book version, renaming it ‘Rough Music’. I thought the snappier title looked good written down, especially on the cover of my, soon to be, bestselling blockbuster.

As I discovered early, writing a novel is a world away from writing a screenplay, and I hadn’t really written proper pros since leaving school. Nevertheless, I waded-in with my size twelves while inwardly rehearsing my acceptance speech for the Golden Dagger Awards.

I sent my first seven chapters to Steve Jeanes, a writer friend of mine in Brighton, anticipating humongous praise and cries for me publish! I was therefore rather miffed at his emailed response: “You can’t write!”

So, that afternoon, armed with a battery of expletives, I mentally dragged my trophy cabinet (not a burdensome task) to The Open House pub in Brighton’s Preston Park.

“Honest, mate, ya can’t write,” repeated Steve when I joined him at his table. I could’ve been wrong, but he’d sounded rather pleased about it. While he was getting drinks, I stewed for a bit and shredded a half-dozen beer mats.

Then, once seated and before he could utter a word, I listed my writing achievements to date, concluding nicely, I thought, with the fact that Mr. Bean sold and continues to sell to practically every country in the world. I understood story structure, I told him, I understood character development. I had attended Robert McKee’s lectures on ‘Story’. Twice! And John Truby’s course, ‘The 22 Steps of Screenwriting.’ Not to mention Jurgen Wolf’s sitcom lecture and workshop. I had the skills, I told him, I had the tools. I’d worked in the storytelling business for most of my life!

Steve took a thoughtful sip of his Guinness before proving his case in under ten minutes.

I’d made the basic mistakes of a first-time writer, he pointed out. And, bum! if he wasn’t right. He’d spotted several blunders in those first seven chapters but here are just two of them:

‘Point of view.’ I was telling the story through two characters in the same ‘scene’ at the same time, or ‘Double-heading’, as another writer friend calls it.

‘John wondered if she’d noticed his tie. She had, remembering how he’d worn it on their very first date.’

At first glance the sentence seems okay, but through who’s eyes are we seeing the scene? His or hers? It can’t be both. So, through John’s eyes:

‘John wondered if she’d noticed his tie. Her smile told him that she had, probably remembering how he’d worn it on their very first date.’

Another one: ‘Show don’t tell’, meaning, don’t say it happened. Let the reader see it happen. The author’s voice should remain hidden, letting the characters tell the story. After all, you wouldn’t expect to see a playwright standing on the stage and getting in the way of his actors, would you?

Here is the author ‘telling’: ‘The warm, sunny day found her lying on her side in the boat. She stirred on the uncomfortable wooden deck.’

And now ‘showing’: ‘She felt the sun’s warmth on her eyelids as she stirred, the boat’s uneven deck pressing hard into her side.’

I’d been guilty of these gaffes and a truckload of others and, as an avid reader from childhood, was shocked not to have noticed the ‘smoke and mirrors’ authors employ in their craft. As readers, we’re not meant to notice these elements, though their absence can often prevent us feeling fully engaged with the story or its characters.

After Steve’s rap on the knuckles, I spent a year doing what I should’ve done at the start. And that was to learn about writing fiction. Although I’d spent several years making a living with words, I had to go back to school. Because even a qualified plumber doesn’t install central heating in his own home without learning how to do it first.

When I finally returned to ‘Rough Music’, I completely rewrote those first chapters. Scriptwriting has taught me that it’s better, and far easier, to rewrite something than it is to fix it.

Aged 64 at the time of writing this, I still have much to learn. But if there’s one piece of advice I could offer someone starting out, it’s this: if you’ve got a story in your head, busting to get out, by all means start getting it down on paper, but read about writing as you go. Learn on the hoof, so to speak. I did just that and found the learning process helped my confidence and motivation to write – each process fuelling the other, throwing up fresh ideas and giving me the confidence to push right on through to the end of the first draft. 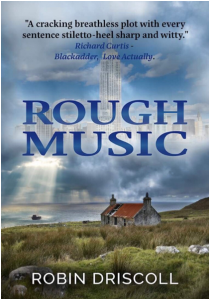 So, is there a book in everyone? was the question, and I think there is. Though, whatever your story’s about, there’s a much better chance of it getting written if you take the time to learn a little about the process. To that end, there are plenty of accessible books out there, whatever genre you’re into. There’s also likely to be a creative writing course available to you locally and loads of free stuff online. So, no excuses. It’s time to get scribbling!

We use cookies on our website to give you the most relevant experience by remembering your preferences and repeat visits. By clicking “Accept All”, you consent to the use of ALL the cookies. However, you may visit "Cookie Settings" to provide a controlled consent.
Cookie SettingsAccept All
Manage consent

This website uses cookies to improve your experience while you navigate through the website. Out of these, the cookies that are categorized as necessary are stored on your browser as they are essential for the working of basic functionalities of the website. We also use third-party cookies that help us analyze and understand how you use this website. These cookies will be stored in your browser only with your consent. You also have the option to opt-out of these cookies. But opting out of some of these cookies may affect your browsing experience.
Necessary Always Enabled
Necessary cookies are absolutely essential for the website to function properly. This category only includes cookies that ensures basic functionalities and security features of the website. These cookies do not store any personal information.
Non-necessary
Any cookies that may not be particularly necessary for the website to function and is used specifically to collect user personal data via analytics, ads, other embedded contents are termed as non-necessary cookies. It is mandatory to procure user consent prior to running these cookies on your website.
SAVE & ACCEPT